Documents approved at Common Hall on 24 June 2021 regarding the role, commitment, experience, knowledge, skills and qualities envisaged for future candidates for the role of Non Aldermanic Sheriff have been published.

Throughout the enforced “lockdown” the Upholders have been keeping busy with a series of Zoom lectures, and on Thursday 11th March we were treated to a fascinating talk by Jo Mabbutt about this spectacular pageant from 500 years ago, whose show of ostentatious wealth has never been equalled.

Jo’s research gave insights into the logistics behind the building of a temporary palace at the event and was driven by her interest as a Painter Stainer in the role of Alderman Sir John Browne, a Master Painter Stainer and Serjeant Painter to Henry’s Court. As a consequence she has amassed a wealth of information that is relevant to a number of other Livery Companies. Whilst our own records of that period have been destroyed, it is inconceivable that our Company did not have some representation given the need for upholstered furnishings and tents.

Ostensibly a summit between two Kings – Henry VIII of England and François I of France – to cement a treaty from 1514, it was an 18 day festival of chivalry and consumption on an almost unimaginable scale for the age. The English built a temporary “Palace” of brick, wood and painted fabric that together with supporting tented village covered an area that was equivalent to the size of Norwich, at that time England’s second largest City.

The event takes its name from the volume of Cloth of Gold that was used to decorate the Palaces and the nobles. This is an extremely expensive fabric woven in Florence (the equivalent price would be £1,300 per metre); in addition there were great quantities of silk, damask, velvet and other richly decorated fabrics used.

In addition to Liverymen and guests in the audience we were fortunate to have Dr Ian Wingfield, a descendant of noblemen who were actually present at the event in 1520. His ancestors Sir Richard Wingfield and Sir Robert Wingfield were Ambassadors to the French and Holy Roman Courts respectively. In a further connection to the Upholders our last Hall at St Peter’s Hill (destroyed in the Great Fire) was Wingfield House.

As a footnote it is hoped that the Exhibition to celebrate the quincentenary of the pageant will be held at Hampton Court Palace between 19 May and 5 September 2021.

The Worshipful Company of Upholders were delighted to install our 637th Master on Tuesday 15th September in a carefully planned ceremony in the City of London.  Congratulations to Mrs Wendy Shorter-Blake MBE, who will serve as Master until April 2022, supported by Senior Warden Mrs Jackie Williams and Junior Warden Malcolm Hopkins FAMU.

All Liverymen are encouraged to read the latest edition of Livery Briefing – July 2020 as it contains valuable information on how the City is coping with the ongoing situation, and what is happening with events and charities. There are invitations for Liverymen to contribute in practical ways to the efforts to support charity.

Upholders Liverymen – Register now for History Society Webinar: Talk, Tales and Q&A on the subject of ‘My East End’ Wednesday 22 July at 6pm

Entries for the London History Quiz closed on 5 July and the results are awaited in the July issue of Upholders News… thank you to the Liverymen & Freemen who took up the challenge!

Look out later this week for Upbraid 23, plus the May newsletter from the Marketing and Communications Committee, soon available in the Members’ area.

In 2018 the Master Upholder encouraged our Livery and Charities to support Fine Cell Work. Fine Cell Work is a charity which makes beautiful handmade products in British prisons. Teaching prisoners high-quality needlework boosts their self-worth, instills self-discipline, fosters hope and encourages them to lead independent, crime-free lives.
Since then one of our Court Assistants has led a series of workshops for this Charity and has taught one of the students to lead the sessions. Between them they have produced a number of footstools, like the one below. These are available to purchase in support of the charity. More examples of the craftsmanship can be found at: https://finecellwork.co.uk/collections/homeware

Adjudication for the 2019 Usher Travel Bursary has taken place and all applicants will shortly receive a letter confirming the outcome.

The Installation of the new Master & Wardens will take place on 9 April 2019. All Liverymen attending the dinner will receive a Master’s pocket Events Calendar, which will be sent to all Liverymen and Freemen in the weeks following the event.

The History Society recently visited the Conservation department of the British Library.  Look out for the write-up of this fascinating visit, available soon. 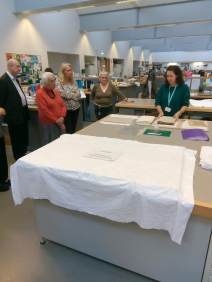 The Installation of the Master and Wardens for 2018-19 took place at Stationers’ Hall on Tuesday 17 April. Master Tim Solway was supported by Senior Warden Anthony Demby and Junior Warden Mrs Wendy Shorter-Blake FAMU, who gave the speech of welcome to the guests. The 177 guests were welcomed by Guardsmen from the Pikemen & Musketeers and musical entertainment was provided by Richard Exall and Amy Roberts. The Upholders’ banner was carried by our newest Liveryman who was clothed during the Court meeting before the dinner. The Speaker was David Stringer-Lamarre who gave the Toast to the Company and was presented with an Upholders’ Cushion by the Master.  Thanks to Toastmaster for the evening Roy Theobald FAMU and Beadle Phillip Chancellor RVM, not forgetting special thanks to Immediate Past Master Mrs Judy Tayler-Smith for a superb year in office representing the Upholders around the City and in Trade events in Lincoln, Salisbury and Hatfield as well as at our Sea Cadets in Chelmsford to launch a new rescue boat provided by the Upholders’ charities. 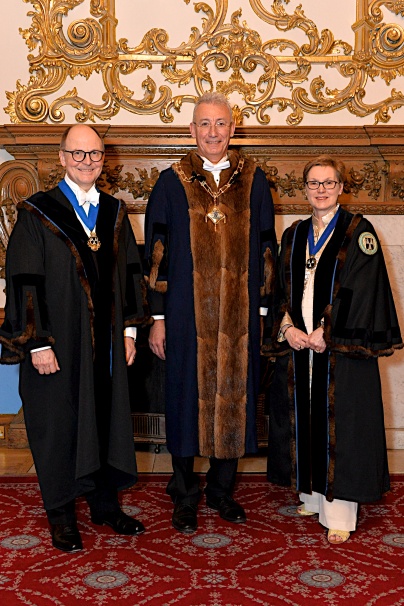 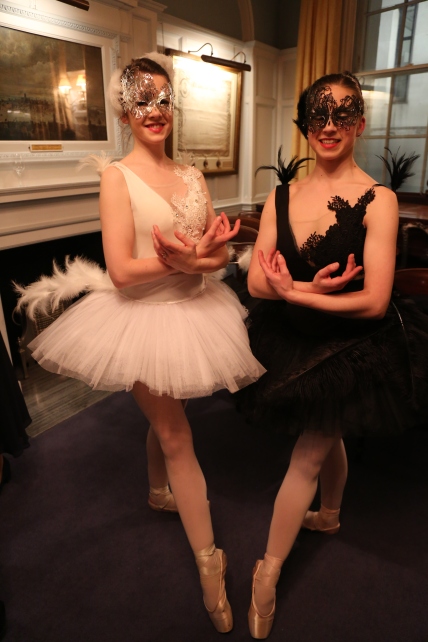 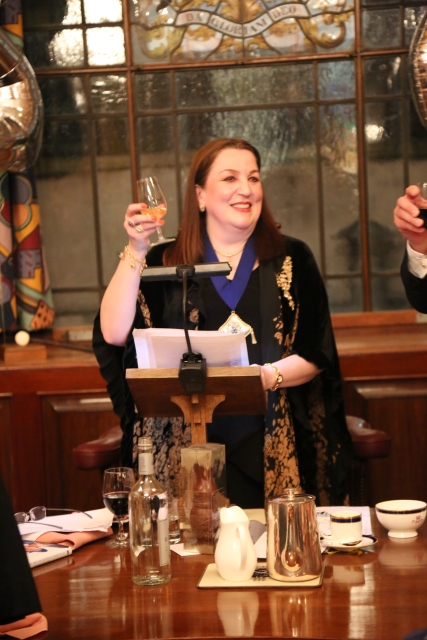 Photographs courtesy of Past Master Christopher Hayman and with Swanette dancers from  https://hire-a-dancer.com/

On Thursday 22 March, 42 members of the Court and their guests attended the Master’s Court Dinner at Dyers’ Hall, where we were welcomed by a pair of swans – one black and one white – most appropriate for the Dyers’ Company!*

Although in most years this is an event for Court members and their Consorts only, this year we were pleased to welcome as Guests of Honour of the Company Margaret and Charles Cowling, widow and son of our late Chaplain the Revd John Cowling.

The food was exceptionally good and greatly enjoyed by all, as was the dancing of the ‘Swanettes’, accompanied on the piano by James Hall, who also entertained us during the dinner.

Written by Past Master & Father of the Company Alan Kinsey

*Representatives from the Dyers and Vintners Companies, travelling in traditional rowing skiffs along with the Royal Swan Uppers dressed in the scarlet uniform of Her Majesty the Queen, participate in the activity of Swan Upping which takes place annually on the River Thames. Swan Upping plays an important role in the conservation of the Mute Swan as cygnets are counted, weighed and their health is assessed. 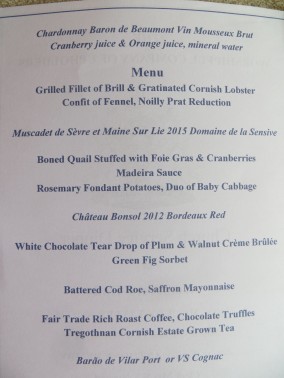 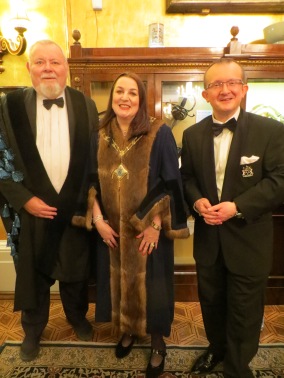 The three tenets of City of London Livery Companies – Fellowship, Charity and Education – were well addressed at Master Judy Tayler-Smith’s last Livery Dinner of her year in office, which was a resounding success.

After our Annual Church Service of Evensong at St Michael’s Cornhill, beautifully sung under the directorship of Jonathan Rennert, we retired to Armourers’ Hall for a sumptuous four course dinner, preceded by drinks and rounded off by a stirrup cup.

We will all have our own personal memories of the evening, but “Fellowship” for me came in the form of the very many conversations with both new and established acquaintances. As a choral singer, it was very interesting to learn about the history of the music sung at the service from the Director of Music. But, there were many more conversations. These included one with a Brother of Charthouse and Past Master Lightmonger, Walter Balmford, guest of Past Master Michael Gilham. Walter is hoping to fly in a spitfire on his forthcoming “very significant” birthday and is so looking forward to it. Also particularly memorable was meeting John Allen, personal guest of our Clerk. John is the 5x great grandson of a former Master Upholder and is himself Clerk to the Gunmakers Company.

“Charity” was a generous donation to the Saint Francis Hospice and “Education” came when Alderman Peter Hewitt JP replied on behalf of the guests in an entertaining and highly informative account of the inner working of the City from an Alderman’s perspective. It was interesting to gain an insight into the variation in the makeup of each Ward’s constituents, learn who is entitled to vote at Aldermanic elections, and how Aldermen have to juggle supporting the interests of both residents and city businesses.

Very many thanks from everyone who came to the dinner to the Master and the Clerk for all their hard work behind the scenes. Dr Christine M Booth, Liveryman

The Master Upholder at the launch of City Giving Day

If you have recently been clothed in the Livery, or if you have been a Liveryman for several years but have not had the opportunity to attend, you are encouraged to book into a City Briefing at Guildhall.

They give a short introduction to the work of the Corporation, especially the relationship with the livery companies. Partners are welcome and there are refreshments afterwards and the chance to mix with members from other Liveries. The 2018 courses will take place on Wed 7 Feb, Mon 21 May, Mon 8 Oct and Tues 20 November.

The Installation of the Master and Wardens for 2017-18 took place on Wednesday 26 April at Saddlers’ Hall. 135 guests attended the celebration where Alderman John Garbutt JP was the Speaker and musical entertainment was by soprano Jennifer Witton and pianist Gavin Roberts appearing by permission of the Principal, GSMD.

As Mr Steven Dollond (Junior Warden 2016/17) is not progressing further at the present time, the Master thanked  him for his hard work developing the new Rules and his energy in tackling some issues challenging the Company.

Before the Election took place, Common Hall voted to adopt the new Rules of January 2017.

We are pleased to report news from the Chelmsford Sea Cadet Unit we support:

Congratulations to Cdt Sgt Alfie of TS Upholder, who was announced in December as the winner of the Halliday Trophy, the national Sea Cadet Award given annually to the Cadet with the best result at the RMC Cadet Corporal to Sergeant exams.

The Master thanked Mr Graham White (Senior Warden 2015/6) for his service to the company as he has decided he is unable to progress further.

Forthcoming Events (bookings may be made through Members Only area)

The Upholders on Social Media